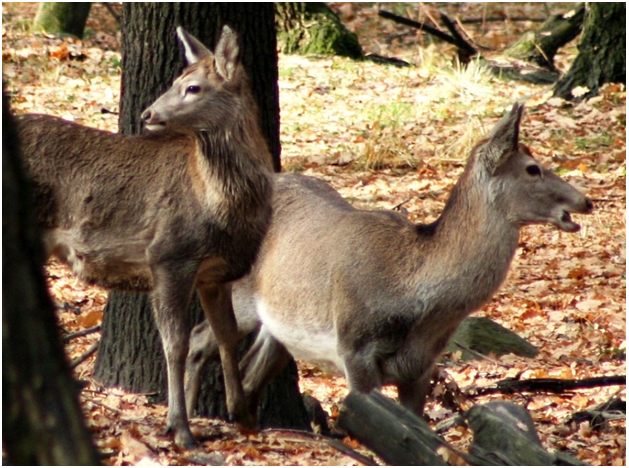 Jammu, May 30 (India Science Wire): For long-term conservation of the critically endangered red deer or hangul in Kashmir, it is necessary to take up conservation efforts beyond protected areas, a new study has suggested.
The state of Jammu and Kashmir has only about 200 Hanguls in the wild. Systematic efforts are underway to conserve them at Dachigam National park on the outskirts of Srinagar. However, continuous inbreeding and geographic isolation have reduced their genetic diversity and any natural calamity or disease outbreak can cause local extinction of this species, the study published in journal Current Science has warned.
Known for its giant antlers bearing 11 to 16 points, Hangul is the state animal of Jammu and Kashmir. Globally, red deer is one of the most widespread deer species in the world. Yet several red deer species have gone locally extinct or are severely threatened. The Kashmir red deer is the only surviving sub-species of red deer in the Indian sub-continent. It has been classified as critically endangered by the International Union for Conservation of Nature (IUCN).


A team of scientists from the Wildlife Institute of India, Wildlife Trust of India and Department of Wildlife protection under the state government came together and carried out a preliminary survey during 2008-2012 in 33 sites in different valleys to assess the possibility of expanding the area for conservation for the deer.
The study sought to figure out whether there were subpopulations of the animals outside the national park and if there were any weather the area where they were found were suitable for recolonization and whether they could be interconnected with the national park. Researchers used open source software, Biomapper, coupled with remote sensing data extracted using ArcGIS for evaluating habitat suitability. Both direct and indirect sighting data along nature trails and paths were used to carry out habitat suitability modeling.
The scientists found that three areas, measuring about 935.46 sq. km, around Dachigam National Park, have greater potential for supporting hangul population. “Our results show the year-round presence of hangul in both Wanghat–Naranag and Chandaji (spanning 292 sq. km) suggesting their high potential to increase further, given adequate conservation attention and legal protection, especially in lower altitude areas which serve as important wintering and fawning grounds,” the study has said.
“Hangul needs a multi-pronged strategy. For instance, the upland pastures that are so important for the species during summer have been run over by the nomadic tribe of Bakerwal and these area needs to be reclaimed and made inviolate if Hangul numbers are to grow. In addition, other areas which were once inhabited must also be given a chance. Conservation breeding programme needs to be initiated soon before the numbers become too low,” Dr. Rahul Kaul of Wildlife Trust of India and a member of the research team, explained while speaking to India Science Wire.
The research team included Dr. Kaul, Mayukh Chatterjee, SmitaBodhankar, Riyaz Ahmad, MansoorNabi Sofi (Wildlife Trust of India); Tapajit Bhattacharya (Wildlife Institute of India) and Samina Amin Charoo of Department of Wildlife Protection. (India Science Wire)