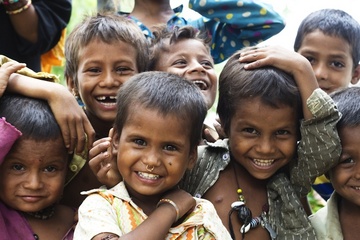 9 SEPTEMBER 2015 ¦ GENEVA/NEW YORK/WASHINGTON – Child mortality rates have plummeted to less than half of what they were in 1990, according to a new report released today. Under-five deaths have dropped from 12.7 million per year in 1990 to 5.9 million in 2015. This is the first year the figure has gone below the 6 million mark.
New estimates in “Levels and trends in child mortality report 2015,” released by UNICEF, WHO, the World Bank Group, and the Population Division of UNDESA, indicate that although the global progress has been substantial, 16 000 children under 5 still die every day. And the 53% drop in under-five mortality is not enough to meet the Millennium Development Goal of a two-thirds reduction between 1990 and 2015.

“We have to acknowledge tremendous global progress, especially since 2000, when many countries have tripled the rate of reduction of under-five mortality,” said UNICEF Deputy Executive Director Geeta Rao Gupta. “But the far too large number of children still dying from preventable causes before their fifth birthday – and indeed within their first month of life – should impel us to redouble our efforts to do what we know needs to be done. We cannot continue to fail them.”
The report notes that the biggest challenge remains in the period at or around birth. A massive 45% of under-five deaths occur in the neonatal period – the first 28 days of life. Prematurity, pneumonia, complications during labour and delivery, diarrhoea, sepsis, and malaria are leading causes of death for children under 5 years old. Nearly half of all under-five deaths are associated with undernutrition. However, most child deaths are easily preventable by proven and readily available interventions. The rate of reduction of child mortality can speed up considerably by concentrating on regions with the highest levels – sub-Saharan Africa and Southern Asia – and ensuring a targeted focus on newborns.
“We know how to prevent unnecessary newborn mortality. Quality care around the time of childbirth including simple affordable steps like ensuring early skin-to-skin contact, exclusive breastfeeding and extra care for small and sick babies can save thousands of lives every year,” noted Dr Flavia Bustreo, Assistant Director General at WHO. The Global Strategy for Women’s, Children’s and Adolescents’ Health, to be launched at the UN General Assembly this month, will be a major catalyst for giving all newborns the best chance at a healthy start in life.”

The report highlights that a child’s chance of survival is still vastly different based on where he or she is born. Sub-Saharan Africa has the highest under-five mortality rate in the world with 1 child in 12 dying before his or her fifth birthday – more than 12 times higher than the 1 in 147 average in high-income countries. In 2000-2015, the region has overall accelerated its annual rate of reduction of under-five mortality to about two and a half times what it was in 1990-2000. Despite low incomes, Eritrea, Ethiopia, Liberia, Madagascar, Malawi, Mozambique, Niger, Rwanda, Uganda, and Tanzania have all met the MDG target.
Sub-Saharan Africa as a whole, however, continues to confront the immense challenge of a burgeoning under-five population – projected to increase by almost 30% in the next 15 years – coupled with persistent poverty in many countries.
“This new report confirms a key finding of the 2015 Revision of the World Population Prospects on the remarkable decline in child mortality globally during the 15-year MDG era,” said UN Under-Secretary-General for Economic and Social Affairs Mr. Wu Hongbo. “Rapid improvements since 2000 have saved the lives of millions of children. However, this progress will need to continue and even accelerate further, especially in high-mortality countries of sub-Saharan Africa, if we are to reach the proposed child survival target of the 2030 Agenda for Sustainable Development.”
“Many countries have made extraordinary progress in cutting their child mortality rates. However, we still have much to do before 2030 to ensure that all women and children have access to the care they need,” said Dr Tim Evans, Senior Director of Health, Nutrition and Population at the World Bank Group. “The recently launched Global Financing Facility in Support of Every Woman Every Child with its focus on smarter, scaled and sustainable financing will help countries deliver essential health services and accelerate reductions in child mortality.”

Among the report’s findings:

Global estimates of child mortality are challenging to produce because many countries lack complete systems to track vital records. The estimates released today are based on statistical models and data from a variety of sources, including household surveys and censuses. All the numbers cited here fall within a statistical confidence range.

The United Nations Inter-agency Group for Child Mortality Estimation or UN IGME was formed in 2004 to share data on child mortality, harmonise estimates within the UN system, improve methods for child mortality estimation report on progress towards child survival goals and enhance country capacity to produce timely and properly assessed estimates of child mortality. IGME is led by UNICEF and includes WHO, the World Bank Group and the United Nations Population Division of the Department of Economic and Social Affairs.

UNICEF promotes the rights and wellbeing of every child, in everything we do. Together with our partners, we work in 190 countries and territories to translate that commitment into practical action, focusing special effort on reaching the most vulnerable and excluded children, to the benefit of all children, everywhere.

WHO is the directing and coordinating authority for health within the United Nations system. It is responsible for providing leadership on global health matters, shaping the health research agenda, setting norms and standards, articulating evidence-based policy options, providing technical support to countries, and monitoring and assessing health trends and improving global health security.

About the World Bank Group

The World Bank Group is a vital source of financial and technical assistance to developing countries around the world, with the goals of ending extreme poverty and boosting shared prosperity. Improving health is integral to achieving these goals. The Bank Group provides financing, state-of-the-art analysis, and policy advice to help countries expand access to quality, affordable health care; protect people from falling into poverty or worsening poverty due to illness; and promote investments in all sectors that form the foundation of healthy societies.

About the UN Population Division

The Population Division of the United Nations Department of Economic and Social Affairs is a leading source of information and analysis on global population trends, and an important centre of demographic research that supports intergovernmental processes at the UN in the area of population and development. The Division produces demographic estimates and projections for all countries, including data essential for the monitoring of progress toward the achievement of global development goals.