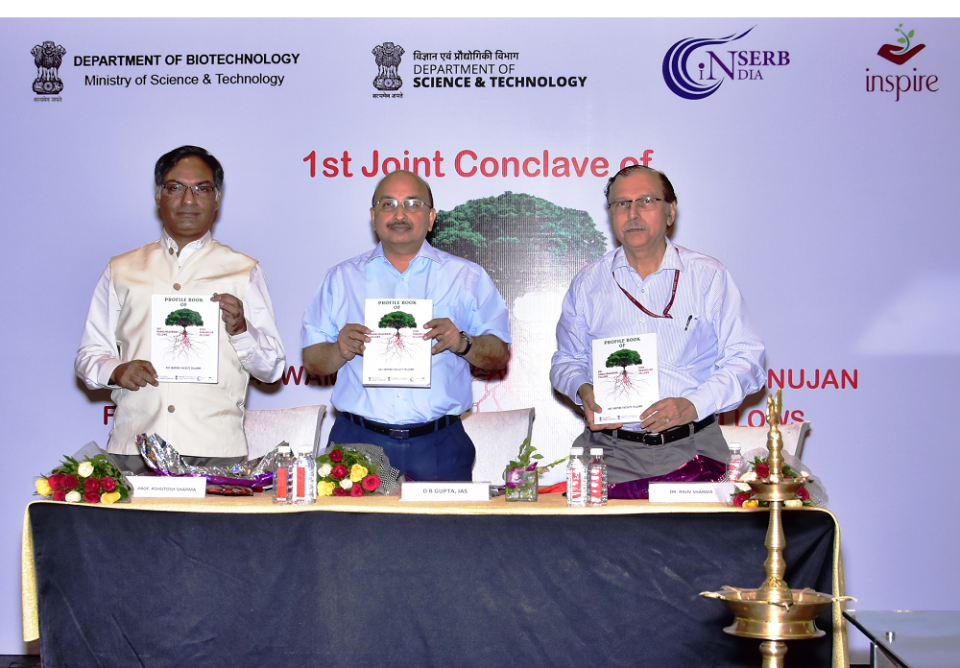 Jaipur, June 8 (India Science Wire): It is a silent change which has been occurring over the past one decade. The schemes launched to reverse the process of infamous ‘brain drain’ have finally started yielding results. The number of young scientists returning to do scientific research in India and taking up positions in research and academic institutions is steadily rising. The quality of research output of these returnees is also very high.
This was reflected in the data presented at the first joint conclave of India’s top three science fellowships – Ramanujan Fellowship of the Science and Engineering Research Board (SERB), Ramalingaswami Re-entry Fellowship of the Department of Biotechnology (DBT) and INSPIRE Faculty Fellowship of the Department of Science and Technology (DST) – which cover all major disciplines.
“It is a historic opportunity that Fellows of these three programmes are coming together for the first time. It is necessary for young scientists from diverse disciplines to interact and work together because new and significant problems occur at boundaries of disciplines,” Prof Ashutosh Sharma, DST secretary, said while addressing the conclave. He announced that DST will fund new ideas and projects if fellows from the three programmes come together to work on projects to solve significant problems.


“The scheme has been able to achieve reverse brain drain and has produced quality research. It is helping in changing the landscape of Indian S & T and is supporting excellence in scientific research in the country”, pointed out S S Kohli, advisor, SERB. Some Fellows have helped create new centres. For example, Dr Sandeep Shukla has set up Interdisciplinary Centre for Cyber Security and Cyber Defense of Critical Infrastructures at IIT Kanpur with an outlay of Rs.15.5 crore.The Ramanujan Fellowship is meant for brilliant scientists from all over the world to take up scientific research positions in India. The Fellows could work in any of the scientific institutions and universities in the country. The value of the fellowship is Rs one lakh per month and each Fellow receives grant of Rs.7 lakh every year to attending conferences and other research expenses. From one fellow in 2006, the number has gone up to 40 in 2017. Most of the scientists availing the fellowship are Indians coming from America. A survey of the Fellows has shown that 69.7% are given permanent positions in host institutions after two years of joining. Ramanujan Fellows have also published more papers and got more projects than scientists working in host institutions.
Dr Meenakshi Munshi, adviser, DBT, said the Ramalingaswami Re-entry Faculty Fellowship of DBT was meant to bring back Indian scientists working abroad so that they can pursue their research interests of national relevance. Since the scheme started in 2007, a total of 312 scientists have returned to India and of them 203 have been absorbed as faculty. They have published over 800 papers, developed 46 technologies and got 24 patents. A couple of startups have also been floated by the fellows.
The INSPIRE Faculty Scheme, started in 2011, has benefited over 1000 young scientists and over 450 have been absorbed as faculty in various institutions. “It is an attractive opportunity for young achievers for developing independent scientific profiles and launch themselves in fulfilling long-term careers. The scheme provides a research career opportunity for five years but not guarantee for a job after completion of this period,” said Dr Umesh K Sharma of DST.
SERB Secretary Dr Rajiv Sharma said the fellowships have attracted a number of scientists and produced quality science. Dr L S Shashidhara of IISER Pune said “the conclave of young scientists has been designed to serve as a platform for mentorship and experience sharing and not just routine evaluation of fellows.” The three-day conclave is being attended by young scientists, science managers, industry representatives and university vice chancellors. Chief Secretary of Rajasthan, Mr D B Gupta inaugurated the conclave. (India Science Wire)