New Delhi (May 27, 2020): Senior journalist, columnist, academician and former Director General of Indian Institute of Mass Communication, New Delhi, Prof. K. G. Suresh today stressed the urgent need to shift from problem-based journalism to solution-based journalism. He even proposed to draw the framework of such courses in media education. He was today speaking at a Webinar on ‘Non-Violent Communication’ organised by the largest journalists organisation of the national capital, Delhi Journalists Association (DJA), in association with the Gandhi Smriti and Darshan Samiti (GSDS). Delhi Journalists Association and the National Union of Journalists (India) proposed to take the discussion on non-violent communication to all over the country. 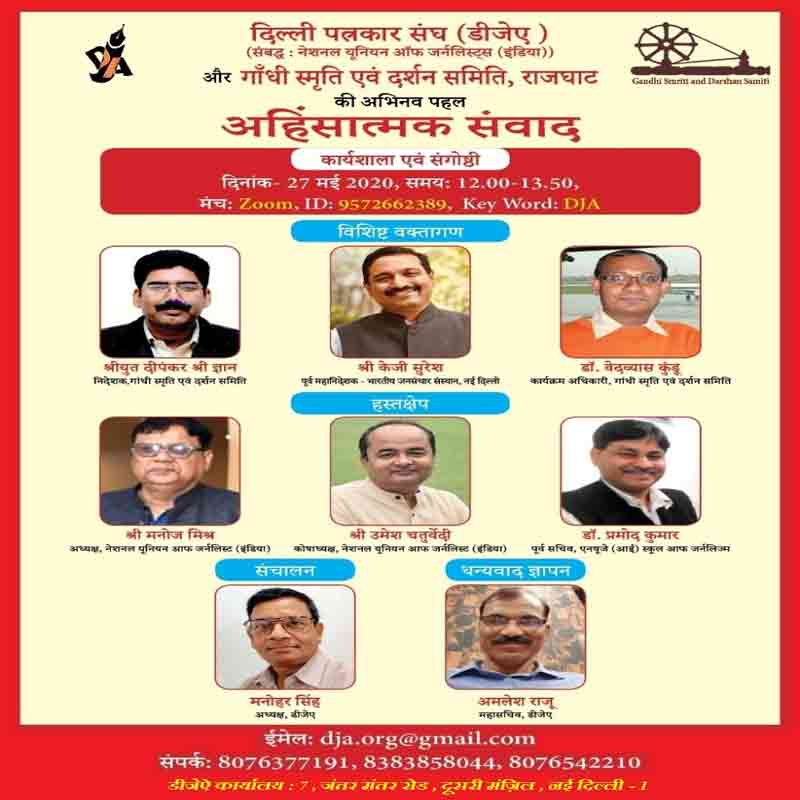 Initiating the discussion, Dr. Vedabhyas Kundu, spoke of the elements of Non-Violent Communication (NVC) in the context of Indian culture and stated the Buddhist principles of coexistence and compassion. Calling Mahatma Gandhi as the progenitor of non-violence, Dr. Kundu said even during the most crucial phase of the freedom struggle, Mahatma Gandhi kept the channels of communication open in his dealings with the British. He also stressed on the need to include the Gandhian approach to non-violence communication in the syllabus/curriculum of the media studies.

Shri Manoj Mishra spoke of Mahatma Gandhi’s distinctive process of finding out the truth in his sojourn in Champaran and that never in his dealings with either the peasants or the British authorities Mahatma Gandhi had instigated the people to take law in their hands. He also spoke about the effective role of media, which he said can diffuse any amount of tension.

Speaking about what he called the ‘tamasha’ culture of television journalism, Shri Umesh Chaturvedi drew the context of the present COVID-19 pandemic and said the problems, which the migrants have been facing could easily have been prevented, had television media played a more proactive and informative role in giving people the right information instead of aiding in spreading rumours.

Dr. Pramod Kumar touched the ideas of journalism of both Pt. Deen Dayal Upadhyaya and Mahatma Gandhi and said negative news that has taken over the media today has to be avoided and journalists must adhere to such principles even in trying times. He also reflected upon the culture of language, while speaking about the electronic media, which he felt has gone from bad to worse. He stressed the need to teach non-violent communication and the ideals of responsible journalism to the media students studying in different educational institutions and universities all over the country.